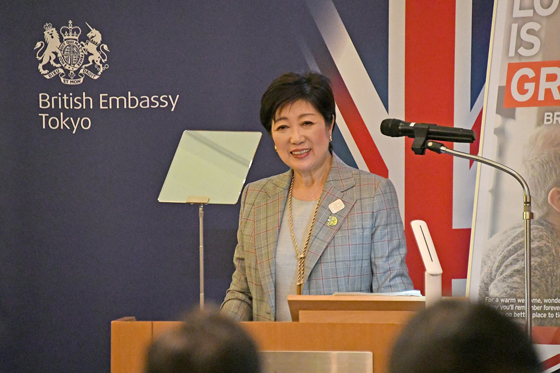 On October 10, 2018, Governor Koike gave a speech entitled “A Tokyo Where People can Live Comfortably and Truly Shine” at“A Diverse and Inclusive Tale of Two Cities” event jointly organized by Lloyd’s Japan Inc., the British Embassy Tokyo, the British Chamber of Commerce in Japan, and the British Council.

The Governor started her presentation by mentioning the significance of October 10, which marks the 54th anniversary of the opening ceremony of the Tokyo Olympic Games in 1964.

The Governor underlined the long relationship between Japan and Britain, which has spanned over 400 years, beginning when the English sailor William Adams, who would go on to serve the Tokugawa Shogunate, arrived on Japanese shores.

The Governor explained her plan to create a New Tokyo that is a Safe City where people feel more secure and more at ease, a Diverse City where everyone actively participates in society, and a Smart City that is open to the world and is a leader in the fields of environment, international finance, and business.

The Governor mentioned the deep bond Tokyo and London share and how the agreement signed last year on cooperation in the financial sector will further deepen the exchange and cooperation between the two cities and further help establish Tokyo as a Smart City. She mentioned how the Lord Mayor of the City of London Charles Bowman visited Japan in July this year and how she planned on reciprocating by visiting London at the end of October.

As part of efforts to make Tokyo a Diverse City, the Governor described how the Tokyo Metropolitan Government (TMG) is actively promoting greater participation of women within its body, stating that 20% of management positions in the city government are held by women and that the Tokyo Metropolitan Assembly has the highest proportion of female representatives among prefectural assemblies in Japan at 29%.

She stressed how TMG is creating policies to support women at work by reducing the number of children on daycare waiting lists by more than 3,100 in 2017. She also mentioned the city’s initiative to support the development of female entrepreneurs as global business leaders, and measures to promote active roles for women in SMEs.

The Governor remarked that there is a need for change in the way both men and women think about work. She called for “life-work balance,” as opposed to “work-life balance,” to emphasize the importance of living a fulfilling life. She explained how TMG is promoting teleworking and “Jisa Biz” (a campaign to stagger clock-in times to encourage comfortable commuting).

The Governor raised the common issue of aging populations in Japan and Britain and emphasized how diversity is necessary to create a society where people play active roles and drive growth. She cited the era of 100-year life, in which lifespans are expected to lengthen and the necessity to encourage senior citizens to participate actively in the society through creation of educational opportunities to support their employment and lifelong learning opportunities including the Tokyo Metropolitan University Premium College program.

The Governor highlighted the importance of individuality and mentioned measures designed to improve working conditions for the disabled as well as plans to allow Tokyoites to choose jobs that match their talents and goals. She indicated that the 2020 Olympic and Paralympic Games will be an opportunity to show the world how Tokyo respects diversity. She underscored a new ordinance that has put into practice the principles of respect for human rights outlined in the Olympic Charter.

The Governor ended her presentation by reiterating her commitment to build an inclusive society in which everyone actively participates and how Tokyo is well positioned to be the embodiment of this spirit with its mix of tradition, cultures, and technology.

In addition to her presentation, the Governor participated in a panel session alongside Dame Inga Beale, where she further elucidated her positions.