Home > The Governor's Corner > Interviews/Speeches > Speech on the Tokyo-London Partnership at City, University of London, October 31, 2018

Speech on the Tokyo-London Partnership at City, University of London, October 31, 2018 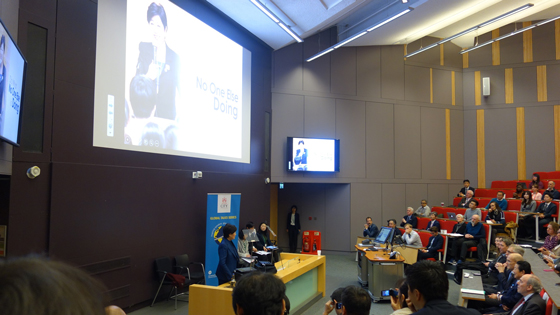 Speaking on her own career, the Governor said, “The consistent element in my wide-ranging career has been a spirit of embracing challenges… regardless of the constraints of the status quo,” and, “I want to encourage all the young people here today to do what no one else is doing, enjoy your life, and contribute to the advancement of society.”

Hearkening back to the beginning of exchange between Japan and Britain, the Governor spoke about William Adams, a young English sailor who served the Tokugawa Shogunate in Edo about 400 years ago. She announced that this year marks the 150th anniversary of the renaming of Edo to Tokyo and how the city has incorporated cultures and technologies from around Japan and the world, while simultaneously preserving its traditions. Koike showed off the “Tokyo Tokyo” logo, which was designed to reflect this dichotomy.

The Governor outlined her plan to create a New Tokyo that is a Safe City where people feel more secure and more at ease, a Diverse City where all can actively participate in society, and a Smart City that is open to the world and is a leader in the fields of environment, international finance, and business.

She expanded on her plan for a Smart City by touching on the programs aimed at elevating Tokyo as an international financial center. This includes cooperation between the City of London and Tokyo in finance, promoting ESG investment, and inviting innovation through an accelerator program.

The Governor mentioned that outside of finance, Tokyo aims to be a Smart City through focus on environment. She stated that climate change is an issue that must be addressed immediately, and spoke about Tokyo’s steps to reduce its carbon footprint, including introducing the world’s first city-level cap-and-trade program and promoting zero-emission vehicles. She also stated Tokyo’s efforts to reduce disposable plastics in partnership with industry, NGOs, and other entities.

She touched on the Japanese word “mottainai,” which reflects the concept of “reduce, reuse, recycle,” and, Koike added, “respect.” To illustrate this, she referred to the “furoshiki,” a wrapping cloth that can be tied to serve different functions. She mentioned an art event featuring “furoshiki,” held in Paris from November 1-6, 2018.

The Governor also spoke about the Tokyo 2020 Olympic and Paralympic Games, and mentioned she intends to use the Games as an opportunity to showcase to the world a model sustainable society. She explained how the “Tokyo 2020 Medal Project,” an initiative that harvests components from used mobile phones and small electronics to create Olympic and Paralympic medals, is an example of the “mottainai” spirit. Additionally, she explained plans to make Tokyo CO2-emissions free during the opening and closing days of the Games. The Games will also be an opportunity to promote telework among office workers, she said. She also expressed her hope that the Paralympics will help create an inclusive society that overcomes differences in ability, gender, and age. The Governor also introduced the Tokyo 2020 mascots and invited the audience to visit Tokyo.

The Governor ended her speech by underlining the importance of partnerships and collaboration between cities all over the world.