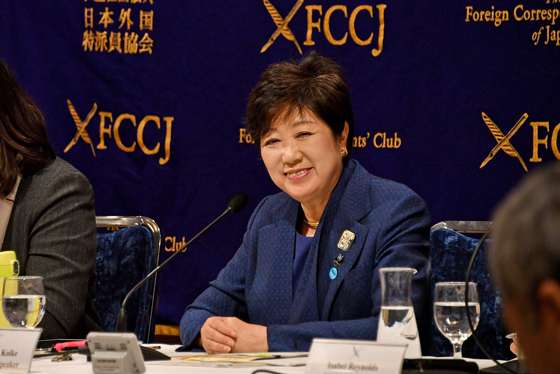 On February 18, 2019, Governor Koike spoke before assembled members from the Foreign Correspondents’ Club of Japan (FCCJ) at the Marunouchi Nijubashi Building in Tokyo. Ms. Koike’s talk covered the theme of: “Designing Tokyo for 2020 – Initiatives for the Year to Come.”

Ms. Koike began her address to the audience by noting that the current reigning Emperor of Japan will soon abdicate the throne to his son, His Imperial Highness Crown Prince Naruhito. She stated that this year will set the stage for a new era for Japan and the upcoming Rugby World Cup, to be hosted by Japan, and the Olympic and Paralympic Games Tokyo 2020 will serve as springboards to transform Tokyo.

“Since becoming governor, I have focused on creating a New Tokyo that is three cities in one: a Safe City, a Diverse City, and a Smart City,” Ms. Koike remarked. She also mentioned three key pillars; “urban resilience”, in part by addressing climate change;  increasing earning potential , which will ultimately drive Japan’s overall economy;  and connecting people from many walks of life to support and empower each other; all in order to strengthen Tokyo’s “urban power” in 2019 and beyond.

In Japan’s current era of population aging and decline, Ms. Koike said, Tokyo and other regions in Japan must work together as partners to achieve sustainable growth.

Ms. Koike also affirmed plans to return Tokyo to its position as a global financial hub city, utilizing an organization to be made up of both public and private representatives. As part of this effort, she noted the 2017 signing of a memorandum of understanding on cooperation and exchange in fields of finance between Tokyo and the City of London.

Speaking on ESG investment, the governor stated that the Tokyo Metropolitan Government (TMG) issued 20 billion yen in green bonds, with that capital going towards smart energy and urban development goals, and environmental features for facilities of the Tokyo 2020 Games.

She also introduced the newly established Tokyo Financial Award to present prizes to companies in financial services that are supporting ESG efforts or providing services that meet citizens’ needs.

A new project Tokyo will roll out as part of additional measures, Koike highlighted, will be a Tokyo Zero Emissions Points program that rewards private consumers for purchasing specific environmentally-friendly appliances. The program will also build offset credits towards the 2020 Games.

On the topic of diversity, Governor Koike noted Japan’s dire standing in the World Economic Forum’s Gender Gap Index - 110 out of 149 countries. However, she said, things are improving with the Tokyo government itself taking the initiative to promote the active participation of women. As another initiative, she explained a conference held in January, 2019 that brought together women executives active on the front lines of business to shape Tokyo’s future.

Ms. Koike additionally spoke about the new Toyosu Market opened in October, 2018. She assured audiences that the new market is operating smoothly and working with the local community to further establish the Toyosu brand.

“Meanwhile,” she said, “the former Tsukiji market will serve a new role in further enhancing Tokyo’s appeal,” with Tokyo planning to fully utilize the site’s potential to support the city’s sustainable growth.

Ms. Koike also stated that, “The Tokyo 2020 Olympic and Paralympic Games are just a year and half away.” Speaking on the 2020 Games, Koike highlighted the legacy left by the previous 1964 Tokyo Games and said that she intends for the 2020 Games to leave a more “intangible legacy.”

In anticipation of 2020, Tokyo is currently holding the Tokyo Tokyo FESTIVAL to promote Tokyo’s art and culture to people from abroad and other parts of Japan. In addition to this project, Governor Koike underlined an art exhibition on  furoshiki cloths in Paris that brought an opportunity for Tokyo to showcase Japan’s culture to the world.

Workstyle reform will be another intangible legacy of the Games, Koike indicated. “Smooth Biz is a new initiative to ease congestion during the Games,” she said. “Our hope is that as flexible workstyles gain traction, we will see increased productivity and greater participation for people from a more diverse range of backgrounds.”

“The Paralympics, in particular, will be a key event that determines the success of the Tokyo 2020 Games,” Koike said. “Tokyo aims to lead the country in strengthening barrier-free standards in lodging facilities,” she added, and that the Open Stay Tokyo project will help towards this goal.

She also noted that volunteers will play a leading role in the Games.

She additionally touched on the Tokyo 2020 Medal Project that will see about 5,000 medals made from harvesting materials from used mobile phones and other devices.

Furthermore, Ms. Koike stated, “I’m determined to make the 2020 Games a success on many fronts to usher in a compassionate New Tokyo. One that is a model sustainable city fit to pass the baton for Paris to create its own Olympic legacy when it hosts in 2024.”

Governor Koike stressed the importance of cooperation with other cities around the world in tackling many global issues such as sustainable development and climate change. In line with this, she mentioned two events to be hosted by TMG in May: The Urban 20 Mayors Summit and the Urban Resilience Forum Tokyo.

“Looking to 2020 and beyond, I hope to pursue partnerships with other cities in order to find solutions for a variety of economic, social and environmental issues and achieve sustainable growth,” Ms. Koike concluded.