Home > The Governor's Corner > Interviews/Speeches > Forum on U.S.-Japan Collaboration on Investing in the Future,April 24, 2019

Forum on U.S.-Japan Collaboration on Investing in the Future,
April 24, 2019 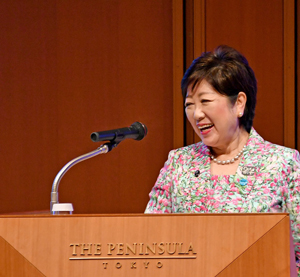 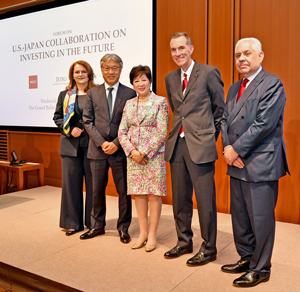 On April 24, Governor Koike gave a speech entitled “Making Tokyo a Global Financial City and an Environmental Leader” at the Forum on U.S.-Japan Collaboration on Investing in the Future jointly organized by  the American Chamber of Commerce in Japan (ACCJ), the Japan External Trade Organization (JETRO), and The Peninsula Tokyo.
She started her speech by mentioning the upcoming Olympic and Paralympic Games Tokyo 2020 and how it will be an opportunity to reinvent Tokyo as a model sustainable city. She expressed hopes of working together with the U.S. to achieve this.

The Governor explained the importance of supporting innovators to make the most of big data, AI and other technologies that are driving the “fourth industrial revolution.” She said that Tokyo intends to push forward with research into achieving Society 5.0, which is expected to further develop its economy while simultaneously resolving social issues, and mentioned plans to conduct field tests of MaaS systems and digital local currencies. Additionally, she spoke of Tokyo’s aim to attract more international businesses in the fields of fintech and asset management in line with the “Global Financial City: Tokyo” vision. She expressed her hope that Tokyo will continue to promote the city’s appeal as a financial marketplace through the Financial Promotion Organization, a public-private group.

She described how ESG investment is critical in supporting sustainable growth and how 20 billion yen’s worth of Tokyo Green Bonds have been issued. The capital raised will be used for smart energy development and environmental features at facilities for the Tokyo 2020 Games. Tokyo launched the Tokyo Financial Awards last year for the first time with the aim to reward companies that are trying to normalize ESG investment and providing services to meet the needs of its citizens, she added.

The Governor spoke about Tokyo’s appeal as a MICE destination and mentioned the introduction of a service center and the launch of the Tokyo Unique Venues website to support international entities considering business events in Tokyo.

She also mentioned a grand piano exhibited in the Tokyo Metropolitan Government building’s Southern Observatory. She explained that this piano was donated by a Tokyo citizen and decorated by renowned avant-garde artist and Tokyo Honorable Citizen Yayoi Kusama.

She laid out her environmental goals including measures, like ESG investment, that will support economic growth with minimal environmental impact. She remarked that Tokyo aims to reduce greenhouse emissions by 30% compared to 2000 levels by 2030 and is also speeding up efforts toward “Zero Emissions Tokyo,” an initiative which also includes the targeted rise in sales of zero-emission vehicles to 50% of new car sales in 2030.

Addressing the issue of marine plastic waste, Governor Koike stressed that the reduction of plastic shopping bags and other single-use plastic products is a critical issue facing us today.

Koike described the mottainai spirit, which frowns upon the disposal of something that is still useful. She underlined how the furoshiki, a re-usable cloth that is used for many purposes including wrapping and carrying things, is the embodiment of the mottainai spirit and how it was showcased in an art event held in front of the Paris City Hall last autumn.

She briefed the audience on preparations for the Tokyo 2020 Games, noting that several Olympics sports venues would be completed in the days following the speech.

The Governor laid out measures to achieve flexible workstyles under the Smooth Biz initiative, which includes telework, staggered work start times, and other traffic demand management measures, and her hopes that they will be legacies of the Tokyo 2020 Games, improving productivity and enabling more diversity in the workplace. She mentioned that the Paralympics will be an opportunity to create an inclusive society for all regardless of age or physical condition.

She also touched on the U.S.-Japan relationship and acknowledged the role of the U.S. in providing support after the 2011 Great East Japan Earthquake, which helped with the recovery and reconstruction of disaster-stricken areas. She introduced the Global Friendship Project, an initiative undertaken by the Tokyo Metropolitan Government to encourage children to learn about other countries and regions participating in the Games. In conjunction with this, the U.S. Embassy launched its “Go for Gold” campaign. She said that she visited an elementary school with U.S. Ambassador William Hagerty where they met children learning about the U.S.

The Governor concluded her speech by mentioning that Tokyo will be the host city next month for the Urban 20 Mayors Summit and the Urban Resilience Forum Tokyo, which will be a platform for city leaders worldwide to discuss how to achieve sustainable and inclusive societies in the face of disaster.