The launch of the “WE & TOKYO” campaign

Take a picture with “& TOKYO” and let the world know about Tokyo’s appeal
Special support by Denpagumi.inc

With the aim of becoming the world’s leading tourist destination, the Tokyo Metropolitan Government is working to establish the Tokyo brand to leave a strong impression on people in Japan and overseas that Tokyo is a place they must visit.
The “WE & TOKYO” campaign was launched as one facet of such endeavors.

The Tokyo brand logo and catch line, “& TOKYO,” and the word “WE” have been connected to create a new sightseeing symbol for Tokyo. So that the residents of Tokyo and all visitors to the city can feel closer to the & TOKYO brand, photo spots will be set up at events held by the Tokyo Metropolitan Government and at key sightseeing locations in the city. This initiative aims to spread the Tokyo brand by having people share their pictures on social networking sites.

Where to find the symbol

*The first round will take place as follows:
July 1 - 31, 2016, at the Tokyo Tower 1st floor lobby
July 1 - 18, 2016, at the Takeshiba Passenger Ship Terminal
After the next photo sites have been decided, details will be announced on the Tokyo Brand official website (https://andtokyo.jp/en/( External link )).

At the photo spots and through the official website, people taking photos will be encouraged to share them on SNS with the hashtag #we #andtokyo.

Advertising the WE & TOKYO campaign through posters
The members of Dempagumi.inc are featured in the poster as special supporters of this campaign. 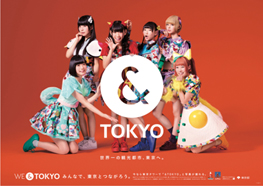 “Hi! We’re Dempagumi.inc, the special supporters of WE & TOKYO. Is there a special place in Tokyo for you? One of our special places in Tokyo is Akihabara, where the six of us have our origins. Lately, we’ve been holding a lot of live events at various locations in Japan and abroad, but wherever we go, we can always take up challenges in our own unique way because we have a place that is special to us, and this makes us feel even more strongly connected to Tokyo.
We hope you will find a place or moment in Tokyo where you feel ‘connected,’ and make it your special place.”

Dempagumi.inc is a Japanese idol group, composed of six girls, Mirin Furukawa, Risa Aizawa, Nemu Yumemi, Eimi Naruse, Moga Mogami and Ayane Fujisaki. They belong to “DEARSTAGE” and are active in various fields. All the members are originally hard core geeks / otakus of anime, manga, games, fashion, art, etc. and they each pursue their own hobbies! The group performed at Tokyo Collection and has collaborated with leading fashion creators including Mikio Sakabe. They attract attention overseas as well and have performed at fashion events in Taipei and Jakarta. They appeared on the stage of JAPAN EXPO in 2013 as Japanese representatives. In 2014, the group was appointed to PR Ambassadors of “Culture City of East Asia 2014, Yokohama.” They belong to a new record label, MEME TOKYO, produced by TOY’S FACTORY. The catchphrase of their CD single “W.W.D /Fuyu e to Hashiridasuo!,” “Don’t mess with us though we start from negative territory!” got public attention and on May 6th, 2013, they successfully performed a solo concert before an audience of 10,000 fans at the prestigious Nippon Budokan Hall in Tokyo. They held a solo concert on February 10th and 11th, 2015, at Yoyogi National Stadium First Gymnasium. The group has come under the spotlight recently!

This project is related to the following urban strategy and approach of the Long-Term Vision for Tokyo.