Climate change from global warming is a serious environmental issue throughout the world. In order to mitigate the risks of climate change, in fiscal 2010, the Tokyo Metropolitan Government (TMG), as an initiative to quickly and significantly reduce carbon dioxide emissions, launched the Tokyo Cap-and-Trade Program, which makes it mandatory for large-scale facilities in Tokyo to reduce their CO2 emissions.

Other than reducing emissions through their own efforts, facilities falling under this program can achieve their reduction targets by procuring the excess emission reductions of other facilities through emissions trading. This system allows businesses to advance initiatives in an economic and rational way. 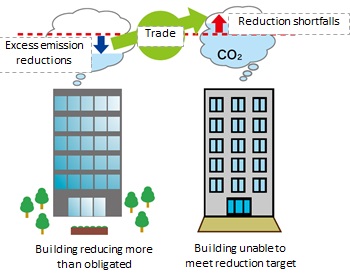 Awards received from international organizations, and other notable achievements