The Tokyo Metropolitan Government has created a new logo and slogan, “Tokyo Tokyo Old meets New”, to effectively convey the attractions of Tokyo overseas.
This logo will be used in various promotional activities overseas.

Regarding the Logo and Slogan “Tokyo Tokyo Old meets New”

The message represented by this logo

A design that presents “Tokyo” in two different fonts in order to intuitively impart an image of the city.
The brushstroke of Tokyo and Gothic block typeface of Tokyo represent the originality of the city, where traditions dating back to the Edo period (1603-1868), coexist alongside the cutting edge culture of today.
The tradition is expressed in black ink, while the new Tokyo is expressed in blue, like the sky spreading forward to express the innovative future.
To give some playfulness, the logo also includes a traditional stamp that shows the one of Tokyo’s newest sightseeing landmarks, Shibuya scramble crossing. 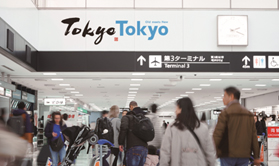 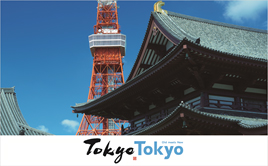