A festival of celebration and enjoyment with Tokyo's citizens

To commemorate the 150th anniversary of the renaming of Edo to Tokyo and the establishment of the Tokyo Government, the Tokyo Metropolitan Government (TMG) will implement the "Old meets New: Tokyo 150 Years" program.
Along with holding commemorative events and related PR projects, this will be a diverse program linked with existing programs and events of the TMG bureaus and Tokyo municipalities.

To celebrate this milestone with Tokyo's citizens and build attachment to Tokyo and a sense of unity ahead of the Olympic and Paralympic Games through a rediscovery and recognition of the strengths and charms of Tokyo as a city, such as the tradition, history, culture, and skill that have been amassed from Edo to modern times to the present. Tokyo 150 Years will also serve as an opportunity to focus on the Tokyo 2020 Games and beyond.

April to December 2018
* Some related events may be held outside of the above period.

For Tokyo citizens to rediscover the attractiveness of a Tokyo where tradition and innovation co-exist, the project logo was designed under the same concept as the Tokyo Tokyo logo for a uniform look.
* PDF of the logo.(PDF:24KB)

4 About the program (planned)

（1）PR using posters and others

Tokyo Station, which has a notable presence as the entrance to Tokyo, was used in the main graphic. The graphic depicts the power of and expectations toward a Tokyo, which has continued to create new eras. It will be used on the official website and in other places.
Other posters showing the 150 years of Tokyo's history and culture will also be prepared and used for a broad variety of events and projects.
* Launch of the official website and distribution of posters are scheduled to start from April 2018.
* PDF of the main graphic.(PDF:87KB) 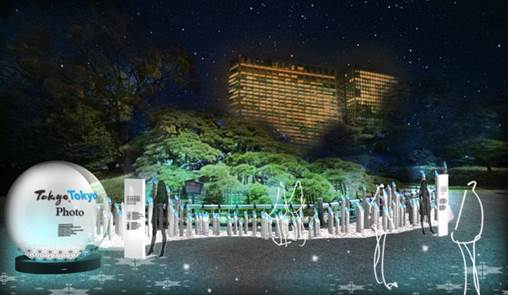 Ever since the Grand Tokyo Festival was held in 1956, kappa pins had been sold at various shops, including lotto stands, prior to Tokyo Citizens' Day (October 1).

This initiative is a part of the Host City Tokyo Project