Home > News > 2020 News archive > Initiatives launched to mark half a year until the Tokyo 2020 Olympic and Paralympic Games!

Initiatives launched to mark half a year until the Tokyo 2020 Olympic and Paralympic Games!

24 January marks six months until the opening of the Tokyo 2020 Games, so Tokyo Metropolitan Government is undertaking various initiatives to celebrate this occasion and to build excitement in the run up to the Games, as detailed below.

From late January trains with special liveries promoting the Games and featuring the official mascots will begin service.

With the cooperation of rail operators, trains with special Olympic and Paralympic liveries will run on five lines.

※There are currently 10 trains composed of a total of 80 carriages fitted with special liveries on the Toei Oedo line, in addition to one train composed of four carriages on the Tama monorail.

2 Decorations for the rake in the Tokyo Metropolitan Government (TMG) No. 1 Building

From Thursday 16 January, the rake on display on the second floor of the TMG No. 1 Building will be decorated with the Games mascots, Miraitowa and Someity. 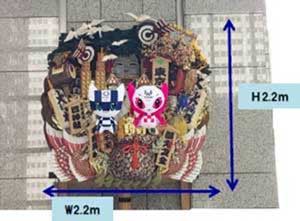 3 Illuminations to mark half a year until the Games

To commemorate there being just half a year until the Games begin, on Friday 24 January the TMG Building will be illuminated.

The illumination will alternate between projecting 5 Olympic colours (blue, yellow, black, green, and red) and the 3 Paralympic colours (red, blue and green) at intervals of 30 minutes. 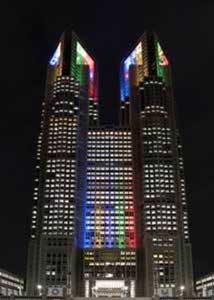 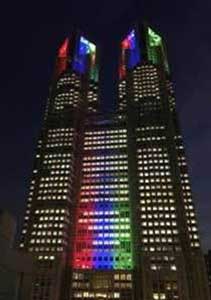