Flood forecasts for the Myoshoji River available from August 6

The Tokyo Metropolitan Government (TMG) and the Japan Meteorological Agency (JMA) will begin to provide flood forecasts for the Myoshoji River, as already provided for the Kanda, Arakawa, Shin-Shiba, Meguro, Shibuya, Furukawa, Nogawa, and Senkawa Rivers.

The Myoshoji River was previously classified as a water level notification river, with the Tokyo Metropolitan Government providing information about the risk of flooding to be used in autonomous decisions regarding evacuation. It will now be classified as a flood forecast river*, with flood danger information being provided in conjunction with the JMA.

*Flood forecast rivers have disaster warning information released when they are considered at risk of flooding due to heavy rain. 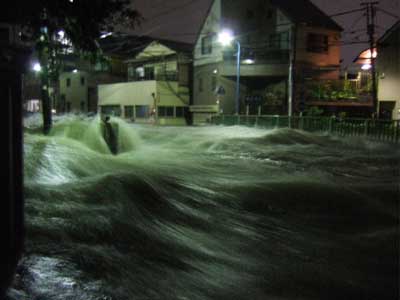 Using JMA rainfall prediction data from up to one hour in advance, the TMG will predict changes to the river’s water level, and if there is thought to be a risk of flooding, the TMG and JMA will jointly release flood danger information*.

In addition to receiving disaster information via radio or E-mail from your local authority, you can find information from media sources such as public radio and television. Furthermore, flood information can be verified on the JMA and TMG websites.

4 What to do if a flood forecast is announced

Because the Myoshoji Rivers’s water level can rise extraordinarily quickly during heavy rain, it is likely that flooding will occur shortly after a flood forecast is announced. If a flood forecast is announced, please act quickly by moving from areas along the river that are likely to be flooded, such as underground areas, and evacuate to the higher floors of buildings.

It is now possible to forecast flooding by the Myoshoji River thanks to analysis of previously gathered data, the installation of stormwater ponds, and improvement in water level prediction techniques.

Location of the Myoshoji River 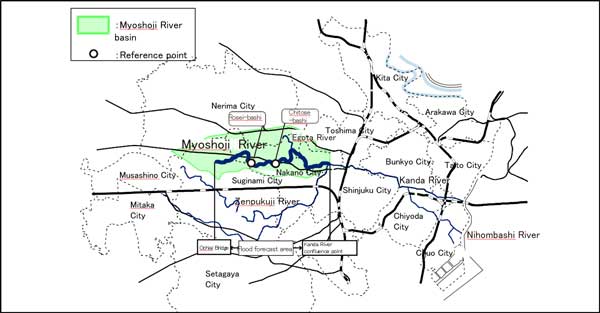