The Tokyo Metropolitan Government’s (TMG) Bureau of Construction has partnered with Tokyo University of the Arts (TUA) to encourage a creative, artistic atmosphere at Ueno Park, setting up a “Concourse of Art” within the park and displaying students’ final projects.

The TMG is pleased to announce that with the cooperation of TUA, the toilets near the “Concourse of Art” have been renovated as the “Ueno Toilet Museum” in order to make the area even more enjoyable.

The “Ueno Toilet Museum” has been created by TUA students using their various skills, including craft, drawing and design. It has been named with the idea that it will stand as one of the many varied museums and cultural facilities that can be found in the park.

The concept behind the Ueno Toilet Museum 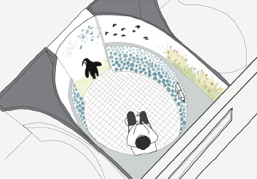 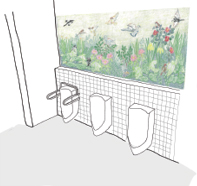 Animals’ bodies are involved in two natural cycles as they live their lives. One begins with eating and ends with excretion. The other is the cycle of excrement being decomposed by microorganisms and returning to the earth, where it helps nurture the development of new life as a part of nature.

But we humans, unlike other living creatures, live in a state where we are cut off from natural cycles. Our excrement, which originally had a productive function, is unable to fulfil that potential if it is limited to just the bodily cycle that takes place in our bodies. That is the issue we have chosen to explore.

When it was decided that we would help renovate the toilets in Ueno Park, we invited our friends and colleagues from various fields, from music to fine art, to contribute to our creative work taking that issue as our theme. Craft, drawing, design, composition, music performance, singing and architecture were all involved. After much discussion between the members of our project, we decided to name our work as the “Ueno Toilet Museum,” with the idea that it would become one of the many diverse museums and cultural facilities in Ueno.

If you enter the toilets, now bright and cheerful, and go into a cubicle, you will be greeted by a wild animal and its natural habitat. The tiles gives the impression of digestion, while the handrails feel like food. The sound of water running seems like that of an animal breathing. Nature and the inside of the body. Here you can go back to experiencing with all five senses the two natural cycles that govern the body. When you leave the toilet and look back, perhaps you will feel aware again of the fundamental aspects of life that our bodies have in common with other creatures.

At present, most of the living creatures on Earth are humans and domesticated animals. How will you rediscover the small cycle that exists within each of us, and which is part of the great cycle that is the Earth? Wouldn’t it be good if we could make people spare a thought about the future that stretches ahead of us? That is what we were hoping to achieve through this small project to renovate toilets. We hope that if you make use of the “Toilet Museum,” after you finish you will feel that something has changed within you.