The Bureau of Port and Harbor has been promoting the Canal Renaissance Project since FY2004. The Project aims to reinvigorate canal areas as spaces for communities and people around Tokyo to enjoy, relax and gather, optimizing precious waterfront spaces in cities.
We designated the Shibaura area and Shinagawaura Tennozu area as Canal Renaissance promotion areas in June 2005. Since then we have expanded and developed the project in other areas.
We are now adding the Toyo Shinsuna area to the project promotion areas. 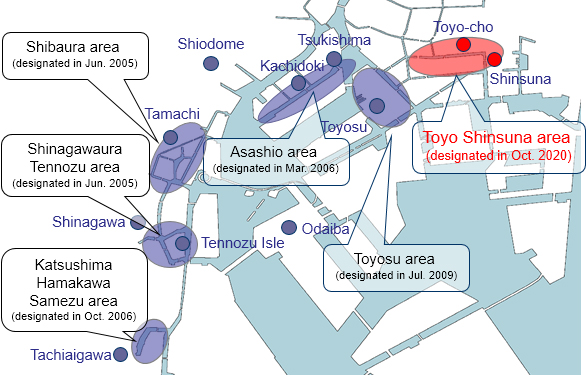 The creation of a health and disaster prevention development zone will be promoted in the Toyo Shinsuna area by taking advantage of the area’s waterfronts.

What is the Canal Renaissance?

The project aims to create local prosperity and attractions by developing waterfront areas around canals so as to improve the attractiveness of the waterfront and promote tourism in Tokyo.

The Shibaura area and the Shinagawaura Tennozu area, and the Asashio area were designated in FY2005, the Katsushima Hamakawa Samezu area in FY2006 and the Toyosu area in FY2009. The Canal Renaissance Conference in each area has been promoting their own voluntary initiatives to create prosperity around the waterfronts.

*See the website of the Bureau of Port and Harbor for details, such as the Canal Renaissance systems (guidelines, etc.) and how to promote initiatives. (Choose the language shown in the upper menu after opening this website and the pages will be automatically translated.)

This press release is also available in other languages. (日本語／English／中文／한국어)