Opening of a Temporary Hydrogen Station at Harumi

The Bureau of Urban Development aims to build a model area in Harumi to showcase how the environment-conscious city is working toward environmental sustainability by adopting new technologies including hydrogen energy, based on the Olympic Village Energy Development Plan*1.
Specifically, we will develop a hydrogen station in collaboration with the Olympic Village Energy Project business operators*2, and introduce a business model for hydrogen supply for vehicles together with hydrogen supply through pipelines, in addition to the supply of grid power.
Prior to the full-fledged start of the project, we opened a temporary hydrogen station to supply hydrogen fuel for vehicles (105-2, 4-chome, Harumi, Chuo-ku, Tokyo) on Monday October 12, 2020. The station was built by ENEOS Corporation, one of the Olympic Village Energy Project business operators.
This facility also supplies hydrogen fuel to FC (fuel cell) buses of the Tokyo BRT (Bus Rapid Transit) system that started provisional operation on Thursday October 1, 2020. 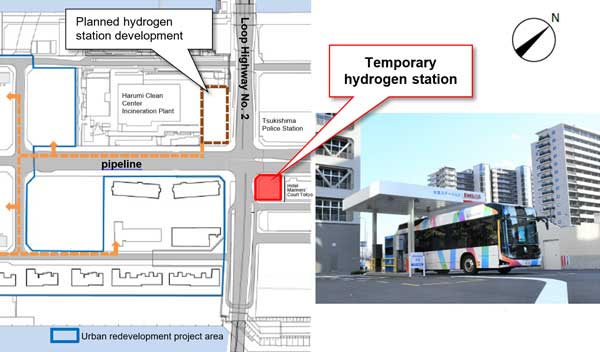 ● This press release is also available in other languages. (日本語／English／中文／한국어)