The Tokyo Metropolitan Assembly is made up of 127 members directly elected by Tokyo citizens to serve a term of four years.

Because the structure and roles of the metropolitan administration are vast, varied, and complex, in order to ensure thorough discussion and efficient proceedings, the Assembly establishes committees for specialized study and discussion. The committees are divided into standing committees and special committees set up by the Assembly to consider specific subjects.

Authority of the Assembly 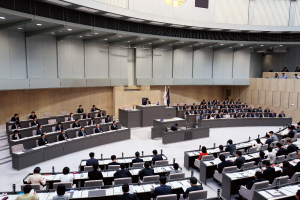 The Tokyo Metropolitan Assembly is the formal decision-making organ of Tokyo Metropolis. It has the authority to, among other things, enact, amend, and repeal metropolitan ordinances, approve the budget and certify its settlement, and elect members of the Election Administration Commission and other such bodies. In addition, the consent of the Assembly must be sought for important appointments, nominations, and other designations made by the Governor such as those of a Vice Governor or administrative commission member. Representing the people of Tokyo, the Assembly also has the powers to investigate and inspect all aspects of the metropolitan government.

The Governor is directly elected by the citizens, and represents the Metropolis of Tokyo. With a four-year term of office, he or she has overall control of metropolitan affairs, and the authority and responsibility for managing the metropolitan administration.

To assist the Governor in dealing with the affairs within his or her authority, Vice Governors and other staff members are provided. A total of 170,193 positions have been approved as of August 1, 2021, for staff members of these auxiliary administrative agencies. (Breakdown: Governor's bureaus, 25,125; administrative commissions and the Assembly, 1,041; public enterprises, 13,068; police/firefighting, 65,162; school teachers and administrative staff, 65,797.)

The Personnel Commission usually holds examinations for the recruitment of new staff, and candidates who pass the examinations are employed by the Governor and other officials who have appointive powers. In some occupations like nursing, specially authorized officials directly conduct exams and employ personnel.

Nationality requirements on 44 out of 72 positions have been removed, opening up employment opportunities to foreign nationals. To accelerate the employment of disabled persons, examinations are held in braille or using enlarged print, and special selection of people with impairments is conducted.

The Tokyo Metropolitan Government's personnel appointment system is based on ability and job performance. Through a fair and impartial selection process, promotion to deputy director and managerial positions is based on personal efforts and merit, rather than academic background or the category an individual was originally hired under.

According to individual career aspirations, “generalization” or “specialization” can be chosen, resulting in a variety of paths for promotion. Young senior staff members are eligible to take the “Managerial Position Selection A” test, and if selected, they are trained to assume managerial positions requiring a metropolitan administration-wide perspective. Team leaders and deputy directors are eligible to take the “Managerial Position Selection B” test, which selects personnel based on their experience and achievements for managerial positions centering on their area of specialty. There is also a selection process for specialists to take on managerial positions in specific areas.

In order to respond to the increasingly sophisticated and complex needs of Tokyo residents for administrative services, as well as to develop human resources possessing a high level of knowledge, ability, and experience who can cope with the various challenges Tokyo faces, the metropolitan government has drawn up a set of basic guidelines aimed at developing metropolitan government personnel. Under these guidelines, efforts are taken to manage personnel with a focus on human resource development; this includes training, performance evaluation, and deployment of personnel resources.

The basic approach taken with respect to solid employee training is to shape individual staff capabilities to match organization needs, and to respond to employee motivation for skill improvement, developing individual capabilities to the fullest. From this perspective, the metropolitan government is implementing a practical and comprehensive human resource development program that effectively combines (1) on-the-job training through daily duties in the workplace, (2) off-the-job training undertaken away from daily duties, and (3) personal development through self-education. 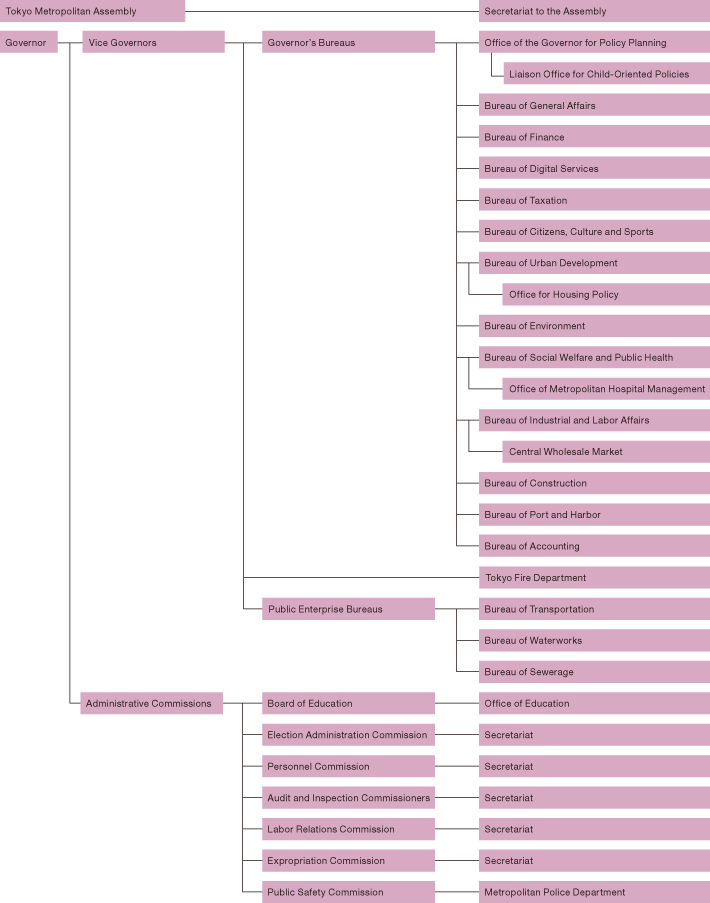 Assists the top management operations of the governor by serving as a bridge between the governor and the bureaus holding jurisdiction over matters on the ground in order to realize strategic and speedy operations that can properly respond to the constantly changing and diversifying administrative challenges facing Tokyo.

In order to make Tokyo a sustainable city that achieves a balance between maturity and ongoing growth, based on strategies such as Future Tokyo: Tokyo's Long-Term Strategy, which serves as the new compass guiding the metropolitan government, the office supports the bureaus in actively implementing advanced measures that will improve the lives of Tokyo residents by working to organically coordinate projects implemented by each bureau from a government-wide perspective. These include:

Coordinates and promotes projects and policies that straddle various bureaus to ensure the smooth implementation of work of the TMG as a whole:

Responsible for the budget and other fiscal affairs and undertakes work on:

For the comprehensive advancement of government services that utilize the power of digital technologies, the bureau's responsibilities include:

Bureau of Citizens, Culture and Sports

Responsible for policies deeply related to the lives of the citizens of Tokyo, such as the following, and for the coordination and promotion of these programs across the bureaus.

Responsible for tasks broadly relating to the lives of Tokyo's citizens and business activities:

Responsible for comprehensive housing policies including:

Undertakes measures for Tokyo to become the most environmentally advanced city in the world. These include:

Promotes integrated and comprehensive welfare, public health, and health care policies to meet the diverse needs of all Tokyo citizens so that they can live in their communities with a sense of reassurance.

Implements projects to promote a wide range of industries, from manufacturing, service, and tourism to agriculture, forestry, and fishing, and for stable employment. These include:

To ensure that fresh food and items such as marine products, produce, meat, and flowers are quickly delivered to the consumers, as the establisher of 11 central wholesale markets in Tokyo, duties include:

Promotes the construction of urban infrastructure that will contribute to the creation of a sophisticated disaster-resilient city, with the aim to realize a comfortable, and highly convenient city that can withstand disasters, by implementing:

Bureau of Port and Harbor

As the organization in charge of accounting, activities include:

Established under the jurisdiction of the Governor of Tokyo for the special wards to work together in fulfilling their firefighting duties pursuant to the Fire Organization Act, the department:

＊ The Monorail is currently not in service.

As of fiscal 2020, supplies water to the 13.63 million residents living in the ward area and the 26 municipalities of the Tama area, an area totaling about 1,239 km²

Conducts the industrial-use water business that supplies industrial water to the eight wards along the Arakawa River and a portion of Nerima Ward.

Responsible for basic functions of the sewer system, i.e. sewage treatment, flood control through removal of rainwater, and quality maintenance of public waters. In addition, based on the Management Plan 2021, formulated in March 2021, the following initiatives are promoted:

Made up of the Director General and five members appointed by the governor upon approval by the metropolitan assembly:

Main affairs managed and administered by the Board of Education include:

The Commission is made up of four members elected by the metropolitan assembly to a four-year term. In order to ensure fair elections, it is independent of the governor

This collegiate administrative commission is assisted by the secretariat

The Secretariat assists the Commission, a specialized administrative institution for personnel affairs, which is independent of the appointing authority

Principal powers of the Commission are:

Secretariat to Audit and Inspection Commissioners

The Secretariat implements audits from the perspectives of compliance, economy, efficiency, and effectiveness

Main powers vested under the Police Act and other laws and ordinances include:

The Commission is made up of 39 members, with 13 each from public services, workers, and employers

The main purposes of the commission are:

The Secretariat assists this collegiate organization, which is an administrative commission with quasi-judicial functions established under the stipulations of the Compulsory Purchase of Land Act

The seven committee members, as well as reserve members, are selected among those with abundant experience and knowledge on law, economy, or public administration, who can make fair judgments on public welfare

Secretariat to the Tokyo Metropolitan Assembly

Prepares the minutes of the meetings

Carries out public relations for the assembly

The Structure of the Tokyo Metropolitan Government (TMG)