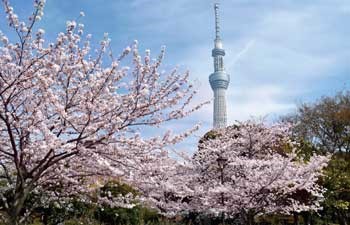 Sumida Park (Courtesy of Sumida-ku)
Download this photo as wallpaper from here.

After getting off at Asakusa Station, head in the direction of the Sumida River. There is a pedestrian bridge called the “Sumida River Walk.” While enjoying a close-up view of the Tobu railway trains running alongside, cross the bridge and get to the other side of the river. You are in Sumida-ku and a lush landscape soon comes into sight.
Sumida Park was a product of post-Great Kanto Earthquake reconstruction. The narrow park stretches north and south, along the Taito-ku and Sumida-ku sides of the Sumida River. The Sumida-ku side of the park was built on the former stroll garden of the Mito Tokugawa family’s Edo residence, with a traditional Japanese garden located in the southern part. Even though the Metropolitan Expressway runs right next to the park, a quiet and relaxing air fills the space.
The best season to visit the park is definitely spring, when the cherry blossoms are in bloom. The Sumida River is renowned for the cherry trees that bloom along its river banks. In the park more than 40 varieties of cherry trees have been planted. These cherry trees bloom at slightly different times, so from the end of February to the end of April, visitors can enjoy different sights of the cherry blossoms.
Adjacent to Sumida Park is the Ushijima Shrine, famous for its “rubbing ox.” The establishment of the shrine dates back to as far as the Heian period (794-1192). In the early Meiji era (1868-1912), the shrine came to be called Ushijima Shrine as it was located in the former Honjo ward along the Sumida River called Ushijima and enshrined the local guardian deity. Ushijima Shrine was reconstructed in the beginning of the Showa era (1926-1989) to become what it is today. The shrine has plenty of must-see attractions, including komaushi (guardian oxen) in place of the usual komainu (guardian dogs), since ushi, the first part of the shrine’s name, means ox, and the “triple torii gates” standing astride in an unusual triple style in front of the main hall.
This is the season when growing buds start to appear on the cherry trees, and the river breeze that gently blows across your cheeks also indicates that spring is coming soon. The ox statues enshrined on the grounds also seem to be eagerly waiting for the spring which is just around the corner. 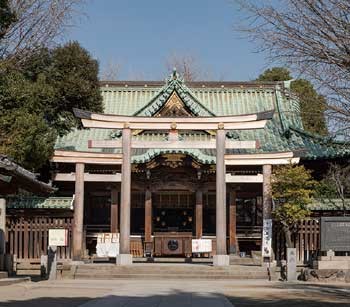 The “triple torii,” a combination of large and small gates

※This article is also available in other languages. (日本語／中文／한국어)