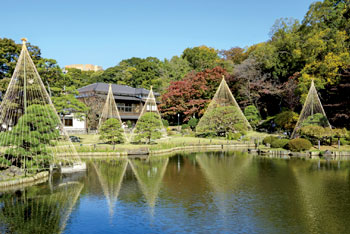 The beautiful scenery of yuki-tsuri, a traditional method to protect the branches of pine trees from heavy snow, at the Higo-Hosokawa Garden
(Photo taken on November 24, 2021.)
Download this photo as wallpaper from here.

From Edogawabashi Station on the Tokyo Metro Yurakucho Line, slowly walk west on the path along the Kanda River while admiring on your right a row of cherry trees, which is a popular cherry blossom viewing spot in spring. After about 15 minutes, you will arrive at the Higo-Hosokawa Garden.

Now a municipal park of Bunkyo-ku, this was the location of the villa of the Hosokawa clan of the Kumamoto domain at the end of the Edo period, and the residence of the Hosokawa family who became nobility in the Meiji era. The Higo-Hosokawa Garden retains the vestiges of those times, featuring a strolling-style garden with a large pond in the center and scenic volume achieved by arranging the rise in the backdrop to resemble mountains. It is said that the garden was modeled after Arashiyama in Kyoto. You will be amazed by not only its beauty but its rich nature as well. You can spot wild birds such as common kingfishers and northern goshawks in the heart of the city.

The Shoseikaku, the garden’s symbolic building, used to be a place for learning established by the Hosokawa family. In the Taisho era, the building was renovated for use as the family’s residence. Former Prime Minister Hosokawa Morihiro is said to have lived there in his childhood. More recently, the Shoseikaku was renovated by studying old photographs and building plans and making use of the original wood structural elements, and was reopened in 2016 as a facility that can be used by anyone. The renewed Shoseikaku building has a tea house on the first floor and an observatory room on the second floor.

Follow the signs and walk up the stairs in the woods, and you will arrive at a gate that leads to the Eisei-Bunko Museum. The Eisei Bunko Museum maintains, preserves, and conducts research on the cultural properties handed down in the Hosokawa family for generations, and holds exhibitions of its invaluable collection under various themes. The current museum building was constructed in 1930 as the administrative office of the Hosokawa family. The interior of the museum, such as the staircase and furniture used in those days, is worth the look.

The Eisei-Bunko Museum that holds over 90,000 cultural properties