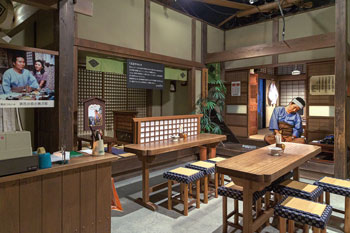 At the “Kurumaya” set, you can sit on stools and touch various items on exhibit.
Katsushika Shibamata Tora-san Museum (C)Shochiku Co., Ltd.

Once you step off the train at Shibamata Station, you are in the world of one of the Showa era’s best known movie series, Otoko wa Tsurai Yo (“It's Tough Being a Man”). Pass by the bronze statues of Tora-san, the main character, and his sister, Sakura, in the square in front of the station, to come to the approach leading to Shibamata Taishakuten (Daikyo-ji Temple) that retains the shitamachi atmosphere of old Edo, bustling with businesses such as shops serving dango (sweet rice dumplings) and roasted eels.
The Daikyo-ji Temple, also known as the temple of sculpture, forms the core of the Important Cultural Landscape of Katsushika Shibamata (the Shibamata district of Katsushika-ku). Beyond this temple, there is Yamamoto-tei (the former residence of a local industrialist) featuring modern Japanese-style architecture and quintessential Japanese gardens. The remains of an underground air-raid shelter there, in particular, enhances the estate’s value as a historical heritage. Behind Yamamoto-tei is the Edo River famed for traditional boat passage across the river called yagiri-no-watashi. The Katsushika Shibamata Tora-san Museum was built on the space made available by the construction of a super levee along the river.
The Tora-san Museum celebrates its 25th year in this Year of the Tiger (tora is Japanese for tiger). The museum has the set of the Kurumaya dango shop (and home of the films’ protagonist Tora-san), which was relocated from the former Shochiku Ofuna Studio where the movies were filmed. Famous scenes that were shot here are shown in the shop’s living room. Other famous sets such as the Asahi Printing Shop, operated by Tako, a supporting character in the series, and the old-style station built under the supervision of Yamada Yoji, the director of the films and a train buff, are also reproduced in detail. You are sure to get hooked on the nostalgic lifestyle of the Showa era and the movie’s attraction. Other highlights of the museum include a railway car that was pushed by humans and a diorama of Shibamata’s main shopping district. Hunting for hidden Tora-san “treasures” scattered throughout is also a good way to enjoy the museum.
At the adjoining Yamada Yoji Museum, various films created by the film director over a half-century span are introduced. Visitors can learn about the time period in which these films were made and sense his thoughts that went into the films. In addition, they can view trailers of all of his movies. The plaque of the People’s Honor Award, a prestigious award conferred by the Prime Minister of Japan, which was presented to actor Atsumi Kiyoshi, who played Tora-san, is also on display.
On October 29th (Sat.) and 30th (Sun.), the Tora-san Summit will be held with the participation of 25 areas Tora-san visited in Japan and abroad in the films. You will have a chance to enjoy treasured original sceneries, culture and performing arts of the localities, their specialties, and much more in Shibamata. The Shibamata Taishakuten main street will also be offering time-limited special menus and a lottery event. 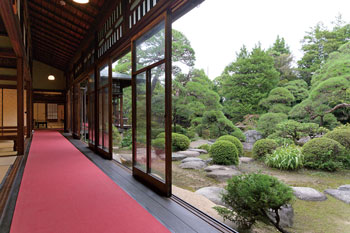 Yamamoto-tei, a Tangible Cultural Property of Katsushika-ku
Download this photo as wallpaper from here.