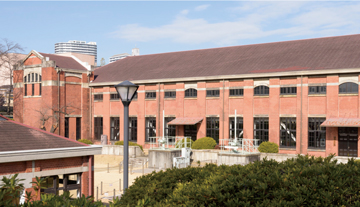 You can enjoy cherry and azalea blossoms in spring
Download this photo as wallpaper from here.

The tour of the Pumping Station follows a network of pipes that used to carry sewage. The first structure that captures your eyes is the chinsachi (grit chamber) consisting of two deep and elongated basins. This was the first pond the sewage entered. Wastewater generated from the area covering Shitaya, Asakusa, and Kanda was collected here to remove soil and other solid wastes. Its unreinforced concrete walls and arched structure utilized the latest technology and limited materials available at that time for maximum effect. You will be amazed by the creativity and ingenuity that went into it as well as its stately appearance.

The grit chamber is linked to pumps by underground sewer pipes, which cannot be seen from the ground. But by wearing a helmet and descending a flight of stairs, you can get inside the sewer channels that were actually used then. The vaulted sewers are just high and wide enough to accommodate an adult. Being there makes you feel as if you have wandered into a scene from a spy movie.

Now, return to the ground level and visit the last spot of the tour—the pump pit. Inside the large red-brick building, as many as ten sewage pumps are lined up. Cutting-edge technologies imported from abroad, including measuring instruments, are used profusely in this facility, suggesting how important and promising it was at that time.

The tour lasts about one and a half hours. Tracing its history and the thoughts of our predecessors may change your image of sewage treatment. 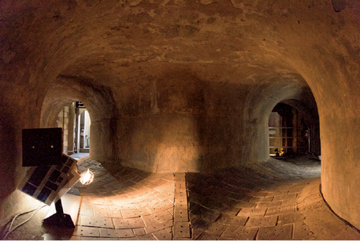 [The Pumping Station at the Former Mikawashima Sewage Disposal Plant]
Phone: 03-6458-3940.
Open from 9:00 a.m. to 5:00 p.m. (on Tuesdays and Fridays).
Closed during the year-end and New Year period.
To enter the facility, you need to make a reservation via the website or phone.
Website (external link).