Connect to a faraway continent some 14,000 km away
The Polar Science Museum, National Institute of Polar Research (Tachikawa City) 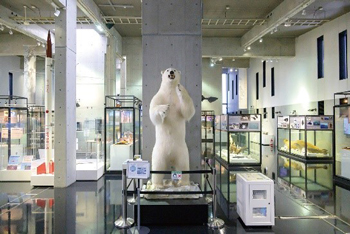 The Exhibition Hall has a wide variety of materials on display
Download this photo as wallpaper from here.

The National Institute of Polar Research was established for the purpose of conducting observations and research on Earth’s polar regions, Antarctica and the Arctic. At the Polar Science Museum, which opened in 2010 with the aim to introduce these activities, many rare items unique to these regions are on display.
Upon entering the museum, two large maps drawn on the floor immediately come into sight. Normally, maps are drawn by placing north at the top. But these are maps centered on the North and South Poles, offering a different image of the world than we usually see. The stage for polar research is just as unique.
When you walk into the Exhibition Hall of the museum, you will find taxidermy specimens of a polar bear and other wildlife; meteorites said to come from Mars and the moon, which were discovered on the Antarctic ice sheet; devices that had been used to conduct surveys; a snow vehicle that completed a 5,200 kilometer round-trip from Japan’s Syowa (or Showa) Station to the South Pole in five months; and more. They’re all authentic, not replicas.
At one corner of the museum, you can watch live images of Syowa Station located in the Antarctic about 14,000 kilometers away from Japan. Visitors can get a glimpse of what’s happening on the continent at this very moment, including the movement of heavy equipment. Moreover, in the Aurora Theater, images of auroras captured on film are shown on a domed screen four meters in diameter. These spectacular global-scale exhibits will keep visitors entertained.
Although Tachikawa is a little inland from the sea, before the Antarctic research vessel (icebreaker) Shirase departs, food supplies and equipment to be loaded on board are prepared here in a facility on the museum’s premises (not open to the public). The journey to distant Antarctica begins from here. 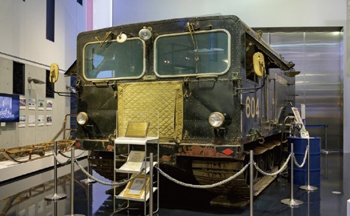 The snow vehicle has been designated a Mechanical Engineering Heritage-

Take a bus from Stop No. 2 at the north exit of JR Tachikawa Station. Alight at “Tachikawa Gakujutsu Plaza” stop. The Polar Science Museum is a one-minute walk from the bus stop.